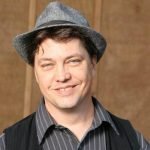 Michael McCurdy is a Musician and Educator who has made it his life mission to pass on the love he has had for music and the arts since his own childhood in Portland, Oregon. He decided to become a drummer at age 9 after seeing a high school band performance, where he immediately approached the drummer afterwards and arranged to begin taking private lessons. As a teen, Michael studied under the great Jazz & R&B legend Mel Brown in Portland, who’s kind, patient way of teaching and constant smile from behind his kit, made a lasting impression and opened his eyes to how music can create connections and shape lives.

Along with his love of music, he is a voracious reader and lover of literature and in 1994 earned a BA degree in English Language and Literature from Portland State University. Working for a few years as a Technical Writer, Michael discovered he also had a love of teaching others. Parenthood also has a way of making one contemplate the future beyond our own existence so, when his son Miles McCurdy was born in 2003, Michael made the decision to become an Elementary School Educator and in 2005 received his Masters Degree in Early Childhood/Elementary Education with a 4.0 GPA.

Moving to Kitsap County in 2005, upon being convinced what a great place it was from occasional visits with his sister who lives in Kingston, he became the Elementary Music Specialist at Wolfle Elementary School in 2007. Working as an Elementary Music Educator, Michael combined his passions for music and teaching with a seemingly natural connection and rapport with children. His focus on using music as a way to connect the community together is one of his most strongly held beliefs and has been one of the biggest reasons for his success as an educator and also as an advocate for music in our community. In 2017, his 5th grade students were composers of a contest winning orchestral piece that was performed by the Seattle Symphony and that same year he was chosen as the NKSD Elementary Educator of the Year.

Outside of the school day, Michael continues his mission of connecting community through the power of music by hosting a warm and welcoming, weekly all-ages open mic at Downpour Brewing in Kingston and by playing in local bands “Blues Counselors”, “the Relics” and “Three Horse Carousel” as well as drumming & recording occasionally with many other local musicians. Michael also has a passion for, is quite knowledgeable, and is an avid collector of many styles of music with a special affinity for music of different cultures and the many ways music and culture are forever intertwined.

Outside his seeming obsession with all things musical, Michael also enjoys spending time with his family, being in & learning about our beautiful natural surroundings, reading just about everything from ancient history to science fiction, great cinema and also sometimes just sitting quietly with no thoughts at all.

He is looking forward to continuing his work of making music and community connections at WildWise and in the Bard Guild, which being about using the arts and storytelling as a powerful way to connect a community, seem like a perfect fit.