Day of the Sámi People 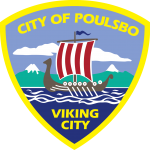 Poulsbo, WA – On December 1, 2018, I petitioned the Mayor of the City of Poulsbo to make a proclamation that February 6th be named the Day of the Sámi People in the city.

Poulsbo proudly calls itself Viking City, and takes great measures to recognize and honor their Scandinavian roots. They have statues of Leif Erikson, signs welcoming visitors in Norwegian, and they even hold a bon fire ceremony on Solstice, complete with “Viking” reenactors.

Flags from all Scandinavian countries can be seen throughout the city, on official government buildings, and private citizens. Norwegians Only parking signs are not an uncommon sight. Businesses named Valhöll Brewing, and Viking Feat Ice Cream, and a shopping center called Viking Village are easily found throughout the landscape.

But, there was no recognition of the indigenous people of the lands they so proudly hail. The Sámi People, who, like the indigenous people of this continent, underwent, and continue to undergo the struggles of colonization, appropriation, genocide, culturecide, environmental destruction of traditional lands, forced education and Christianization, imprisonment for living by traditional ways, and the annihilation.

Many Sámi face complete extinction, entire distinct language and cultural groups are critically endangered, some are now completely gone. For my people, the Pite Sámi, there are less than 50 native speakers of our language left in the world.

The Mayor’s office responded positively to my request, and asked that draft a proclamation for Mayor Becky Erickson to sign. I was elated that there was such a positive response from the City of Poulsbo, and began working on my draft. A few days later, I was ready to send it off to the Mayor’s office, not entirely certain how they would respond to what I had written.

I called out the colonizing governments of Norway, Finland, Russia, and Sweden. The discrimination, prejudice, and the violation of indigenous rights.

For a week, I didn’t hear anything.

Then, an envelope arrived in the mail from the City of Poulsbo. It contained my proclamation, as written, signed and sealed by the Mayor.

Today, the City of Poulsbo will be flying the Sámi National Flag at City hall, and this evening, Mayor Erickson will be reading my proclamation at the Poulsbo City Council meeting at 7PM.

Thank you to the City of Poulsbo, for standing up and recognizing the Sámi People.

It should also be noted, that on December 9, 2018, 3 days after petitioning the Mayor’s office, I reached out to Liberty Bay Auto Center, who flies flags from every Scandinavian country on their building, encouraging them to join the City of Poulsbo in honoring the Sámi people and fly the Sámi National Flag on their building. I never heard back from them. I even went in to their office, since we are also in search of a 15 passenger van, and mentioned that I had reached out regarding the matter. The salesman pulled up my name on the computer and I was listed, as I had sent the inquiry through their website, but there was never a follow up by anyone.