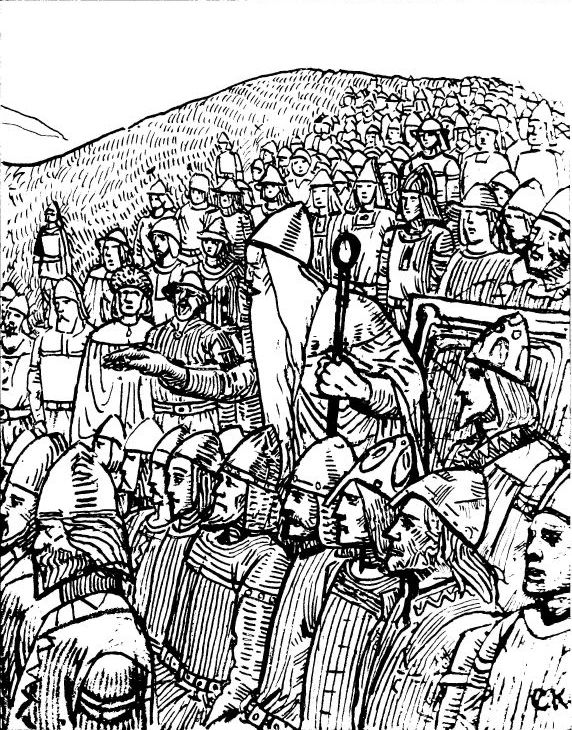 In Germanic Tribal Law, which could vary from tribe to tribe, and as with all cultures, evolved over millenia, was largely based on a compensation practice around the first century.

The majority of crimes, including murder, were settled through compensation for damages, and it generally frowned upon a revenge approach. Damages were largely determined by the victim, and ordered, if decided fitting for the crime, by the chiefs or by law speakers, who held the oral legal traditions for the tribes.

For much of Germanic Tribal history, only three crimes resulted in death.

– Incest – A forbidden act under all Germanic beliefs.

– Rape – A truly despicable act, with its own unique punishment, but typically only applicable upon the rape of fellow tribal members or other Germanic tribal members.

Treason was dealt with by hanging, as was incest, unless it was rape.

For rape, the perpetrators hands and feet would be bound, and they were thrown into peat bogs, as they see these crimes as being so heinous, that the evil of the perpetrators must be buried in the earth, never to return or be able to be honored by their families. Some of these criminals are found today, and are known as bog bodies, or bog people.

The excavation of these bog people would be seen as the reason why there is such a prevalence of rape and pedophilia in modern culture, their evil has been released from where it was sealed thousands of years ago.

For all other crimes, such as bodily injury, standard values were set for each body part, and an entire life was set with a weregild, also known as a man price. The average starting weregild for a freeman was equivalent to two hundred shillings of the time. Social status, rank, and amount of possessions would increase the weregild. Chiefs and nobles were often valued at twelve hundred shillings.

The weregild of all women was twice that of a man of equal status.

Early Roman and later Christian expansion from the sixth century onward, gradually replaced the compensation system with broader capital punishment for lesser crimes. Rape and incest were also transitioned to compensation offenses, but only if perpetrated against a Roman or Christian. It generally did not apply the other way.

These Roman and Christian policies continued in the empire scheme throughout Europe, and were also applied in American expansionism against the indigenous tribes of the North American continent.