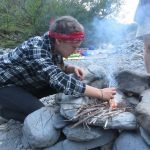 Madrona has been with WildWise School from it’s very founding, first as a student in the Adventure Scout program and has spent the last three years as an apprentice for WoodSprites, Adventure Scouts, and Summer Camps. She is excited to be coming on as staff and is comfortable and competent taking part in the Ranger, Crofter, Voyager or Bard Guilds.

Spending her childhood exploring the forests, streams, and shores of her home on the Quimper Peninsula, she has always had a strong connection to the natural world and impressed her peers and relatives with knowledge about native plant species. One of her first mentors was Justin Lake during her time with CedarRoot Folk School and WildWise School’s Adventure Scouts, and she is excited to join him this summer as a mentor herself in WildWise School’s Ranger Adventure Camp.

Madrona also attended Sunfield Farm and School where she learned many skills including how to raise farm animals and garden, and how to knit, crochet, and needle felt. She also is a student in the Youth Environmental Stewardship Program (YES!), which includes working with kids and organizations like the North Olympic Salmon Coalition and the Jefferson County Land Trust, restoring native habitats while studying natural history.

Last summer Madrona completed a rite of passage on a three week backpacking trip traversing the Olympic Mountain Range and along the shores of the Pacific Ocean with Rite of Passage Journeys. Besides spending time in the Wilderness and environmental studies, Madrona enjoys reading novels, climbing, archery, crafting, fishing for salmon, and participating in the Drama Program at Kingston High School. Her favorite animal is the bobcat and her favorite tree is the Vine Maple.