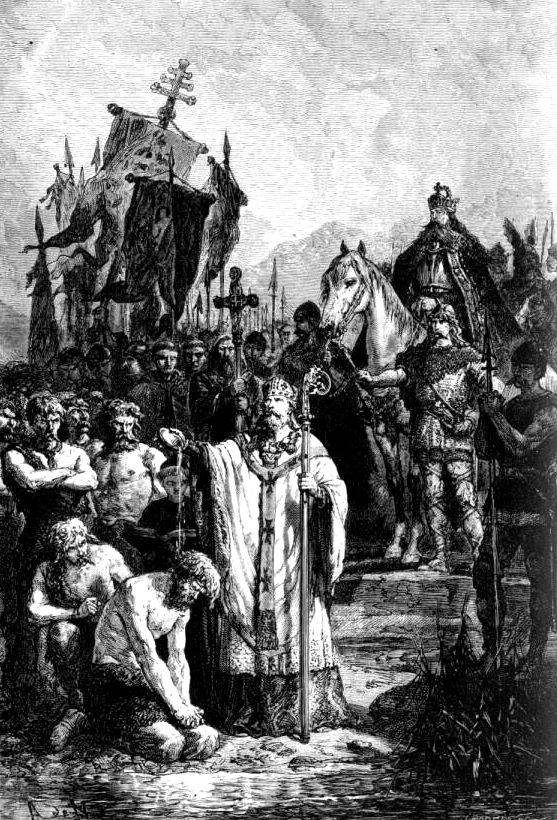 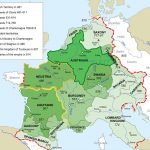 Verden an der Aller. A town of just over twenty six thousand people today, located in Lower Saxony, Germany, on the Aller river, has been the site of many happenings throughout its long history.

One of those happenings is known as the Massacre of Verden.

In the year 782, near Verden, at the confluence of the Aller and Weser rivers, Charlemagne, the Roman Catholic King of the Franks, King of the Lombards, and eventual Emperor of the Romans, ordered the mass execution of four thousand five hundred Germanic Tribal chieftains and heads of families who were said to have been leading the revolt against Charlemagne’s forced Christianization of the Germanic Tribes to Roman Catholicism in Saxony. All of them were executed in a single day.

In the Royal Frankish Annals of 782, these Tribesman are labelled as “Evildoers”, today, a familiar term in modern American politics. 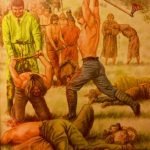 Ten years prior, in the winter of 772, the Saxons raided, sacked, and burnt a Frankish Christian church in Deventer -which had been built by Lebuinus in 768- as a preemptive strike against a hostile invading Christian Frankish force and to prevent the annihilation of their indigenous cultural ways, which were growing and expanding in Germania, pushing into the expanding Roman Catholic Empire of the Franks.

Lebuinus, an Anglo-Saxon born missionary, wanted to follow the example of Saint Boniface, who had felled Donar’s Oak in Germania a few decades prior.

He devoted his entire life to the conversion of the indigenous Germanic Tribes from their Pagan ways, to Roman Catholicism. Lebuinus founded the town of Deventer, and built the church which was eventually burned by the Saxons four years later, on the east bank of the river IJssel. 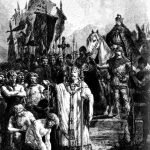 In retribution for burning Lebuinus’ church, which was built without permission on Saxon lands, Charlemagne destroyed the Irminsul, a sacred tree and grove to the Saxons, a location as important and sacred to the Saxons as Yggdrasil is to the Northern Tribes. It was the pillar believed to support all of the skies, the tree of life. It was the center of all indigenous Saxon culture and belief, comparable to the importance of the Vatican or Salt Lake City to some Christians today.

There was no holier place for the Saxons than the Irminsul.

The destruction of the Irminsul sparked the thirty two year long Saxon Wars and the forced Roman Catholic conversion of the Saxon Germanic Tribes.

Hundreds of thousands of indigenous Germanic Tribesmen would walk away from their ancestors, their traditions, their songs and stories, and convert to Christianity, becoming “white” and joining the Empire, choosing to no longer be victims, and instead, become perpetrators.

Even more would refuse to convert, and would be executed for the crime of Paganism, often at the hands of their own Christian converted family members or friends. 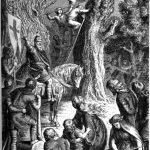 Charlemagne, in 785, created the Capitulatio de partibus Saxoniae, “Ordinances concerning Saxony”, or “Saxon Capitularies”, generally considered to be Charlemagne’s rules for forced Christian conversion of pagans through the use of terrorism.

In the Capitularies, he wrote:

The Masacre of Verdan is seen to be the precursor to the official policy of Charlemagne’s Frankish Empire, and it is a policy that has been continued into our very recent histories on the North American continent, and a policy of Christian churches and governments throughout the world.

Convert, or suffer and die.

In the mid-1930s, a memorial was constructed near the possible location of the massacre, called the Sachsenhain, the Saxons Grove.

It became a meeting place for the Schutzstaffel. The Nazi SS.

Charlemagne wasn’t always seen in a positive light in Germany due to his brutal campaigns against the Germanic Tribes and forced conversions, but Hitler, along with Joseph Goebbels, rehabilitated Charlemagne into a positive influential figure, using growing positive public opinion in order gain favor among French Nazi sympathizers and volunteers, even going as far as incorporating French Militia units into the Nazi army, naming them The 33rd Waffen Grenadier Division of the SS Charlemagne.

Members of The Charlemagne Regiment were defending the Führerbunker during the Battle in Berlin until the end of the war.

The city of Aachen, where Charlemagne resided and died, holds an annual award, known as the Charlemagne Prize. It is awarded to people who contribute to the unity of Europe.

It honors Charlemagne, King of the Frankish Empire and founder of what became the Holy Roman Empire

Winston Churchill, Pope Francis, and Bill Clinton are among the recipients of this prize named for the brutal anti-indigenous terrorist and tyrant, King Charlemagne.